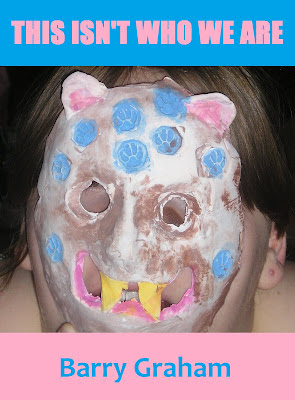 Barry Graham
This Isn't Who We Are
Short Stories
70 pgs.
October 2012


This Isn't Who We Are is a collection of fairy tales for an age of streetwise and demented youth. You are pimped by your brother, find your mother unconscious and naked on the lawn, or try having sex as part of a teenage girl's plot to become the Queen of England. And even if you are able to snatch a brief moment of elysian harmony from a thoroughly dystopian world, you'll get bored with it soon and crush it. Graham's characters are in search of their identities, with everyone and everything against them - and yet, with each sentence they push open doors into new stories, and we catch glimpses of beauty born of decay and destruction, of self-discovery at the expense of innocence and long-term mental stability.


What people have said:

“With its seamless juxtaposition of tenderness and violence, absurdity and cruelty, Nothing or Next to Nothing is a well executed experiment in 21st century American Naturalism.”
-- The Examiner

"...hurt imbues every word coursing through this smart, calculated, anti-fable. Graham's work offers a poignant, unflinching portrait of a life dedicated to an all-consuming love from which the narrator receives nothing - or next to nothing - in return."
-- American Book Review, Andrea Kneeland

“Graham takes an unflinching look at the land Whitman once lauded, a land now pimpled with Golden Arches and populated by heads full of American Dreams turned rancid. No illusions, no redemption, either. Graham's distinctive prose illuminates those things usually left in the dark corners of American culture, places Uncle Walt could never have imagined.”
-- Christopher Kennedy, Trouble with the Machine

“A frenetic, jangled, edgy, tragic, disturbing joyride through angst-ridden Middle America, The National Virginity Pledge feels like a cross between a David Lynch movie and a trip to your favorite dysfunctional uncle’s house — and I mean this in the best way possible.”
– Small Press Reviews, Marc Schuster

“…with its clipped, achingly real dialogue, and its effortless and vivid description, it achieves a relentless undercurrent of: Look closer: there is more.”

“It's very much worth reading the minutia of vileness, indeed, important and relevant to do so...”
-- The Collagistt, Paula Bomer

“Graham’s stories are little cries for help from way in the corners and deep in the cracks of contemporary fiction.”
– Jeff Parker, Ovenman

“Graham’s writing hits hard because it is raw and honest. He will suck you in with equal parts everydayness and voyeurism.”
-- Aaron Burch, Hobart

“Graham’s heroes want to love, yet bigger than their love for people and things is their capacity to destroy the objects of their affection. He doesn’t scorn them, though; he treats them with care and a loving tenderness. He turns grief, betrayal, and violence into something close to poetry, and finds beauty in places we should never wish to visit.”
–Stefan Kiesbye, Next Door Lived a Girl

“In a world in which nothing or next to nothing matters anymore, Barry Graham's hero is doomed because he hasn't erased his last shred of decency yet. He suffers abuse, heartbreak, beatings, and ultimately the loss of the only person he ever cared for, because he can't believe in a world where a McDonald's restaurant might be the last church, and an okay BigMac our last prayer. Graham's book is an elegy to something we've lost without noticing or caring. It's a mean punch to the chin; it floors you, and still you'll be glad you took it.”
–Stefan Kiesbye, Next Door Lived a Girl

"This is a classic tale of trash... It is the story of a life unlived but still destructive."
-- Jason Behrends, Orange Alert

“...doesn’t try to be too clever despite the non linear storytelling. It is as gentle-paced as amphetamine and inhabits a universe diametrically opposite from the Waltons.
-- Martin Macaulay, PANK