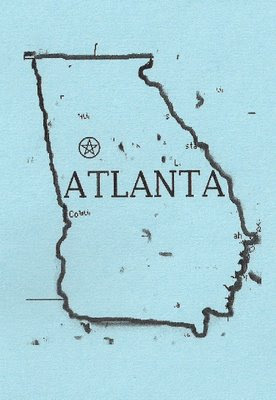 "When I moved to Atlanta, thunderstorms blew through the afternoons. I’d tell my friends in Nevada that I’d moved to this tropical rainforest. Clouds of mosquitoes heaved hordes of citizens above skyscrapers, then dropped the husks of their bodies to Peachtree Street. The hulls of destroyed brick rows lurked underground, and above, fiberglass rocketed into the rain. Hardwood floors lined my apartment, and cockroaches scrawled notes across my chest. With the humidity, I inhabited the inside of a mouth, the space between ass cheeks. The cat wailed to go outside, forever and ever."

"Years ago, armies had drug cannon and bodies through the pine needles and mud in these hills while Sherman was fixing to set everything ablaze. The tiny people driving their tiny cars in the tiny towns below grew tinier as we mounted the summit trail. The rocks sat bald as rocks, evidence that even before the North ravaged the South, glaciers had slithered through, eating everything and giving birth to boulders. Our sandwiches were lined with turkey we had not shot nor beheaded. Later, when we left the mountain, we did so in a Toyota made from and powered by paleobotanical remnants. Sarah’s pants, like all pants, modestly covered her ankles. She hummed and sighed when I fumbled through my past: my parents were Yankees, and I came from West to East, and I’d once smoked crack. Maybe more than once. “Just to lay everything out there,” I said. My fingers felt for skin to pick and instead pulled at a tree’s. “I’m only half-Southern,” Sarah said, and she explained that only her mama came from Georgia. That made me feel better."

"What in the hell are these things? Stories? Poems? Stoems? Whatever they are, they have (lucky for us) catapulted from the brain, indeed the life, of this epicurean-poet-goon-maniac from Atlanta-via-Reno-via-northern-California. This book (much like the speaker himself) moves with a moody cat, and resolves amidst (and beyond) the sometimes seedy underbelly of Atlanta with its cavernous tavern dives, its ungodly cockroaches, its lust for excess. When you put down this book, you might suffer a hangover. But these pieces simultaneously achieve a sense of bildungsroman (think Joyce, not Sherwood Anderson). The consistency of voice and style here is remarkable, as is Iredell's knack for creative metaphors (think Richard Brautigan). James Iredell has the skillz to pay the billz. Wait, he's a poet so he can't pay his billz. What I mean to say is, he has the skills to throw out the mail and keep scribbling, which is something he is always doing, and doing well."